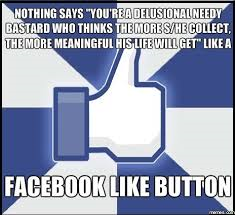 Let’s face it; social media is addictive, deceiving and just about unavoidable. While scrolling through Facebook at a doctors office, out of about twelve people, I noticed that everyone in the waiting room gave their undivided attention to some type of mobile device. Not to assume that they were all logged on to social media, but I did ,however, notice the guy sitting next to me was also. Among all the social networking sites, Facebook is the most used with over 750 million views worldwide. People crop, prop, edit and go to the extremes  just to see how many people will hit the “like” button. Much more serious than that, not receiving the desired attention can have a person questioning their own worth, identity and character.

Essena O’neill, a model discovered through her post, has recently announced that she is quitting social media, and she has received an outburst of criticism for it. O’neill stated in a desperate cry for understanding “At twelve, I told myself I would be of value the more views I got on You Tube. I looked at girls that had heaps of views and thought- damn I want that.” She went on to say “The only time I felt better about myself, really, was the more followers, the more likes, the more praise, and the more reviews I got online.”https://www.youtube.com/watch?v=Xe1Qyks8QEM

This young lady defined herself by the opinion and validation of others, and I must say that I am guilty likewise myself. From the very first time I posted a photo, or an opinion, or even personal things pertaining to my life, and received many “likes” because of it, I wanted more. After a year or more of this behavior my post became more and more generic. I purposely took pictures a certain way, and I would sometimes meditate all night of something catchy to say. Psychologically, it began to get so bad that I could care less about the post itself but only the number of “likes” it received. As a Christian woman, to get sucked into this mind frame was just shameful. I thought because I was diligent to only post positive things that no negativity could come from it, and then there was the wake-up call.

Positive or not, everyone is not going to like you. Some people don’t feel good about themselves and therefore reflect constant negativity toward others. In a Psychology Today article, published by Psychological Science, researchers Amanda Forrest and Joanne Wood concluded in their study of social media that people with low self-esteem tend to criticize their friends with negative details of their lives. Ultimately, making them less likable as “friends”.https://www.psychologytoday.com/blog/wired-success/201203/is-facebook-good-or-bad-your-self-esteem

I experienced this criticism personally. Although I gained the “likes” of many, dislikes came right along with them. Facebook does not have a button for dislikes, but I could sense through subliminal messages and indirect statements those who seemed to dislike me. Or, maybe it was me just assuming that. Maybe it was all in my own head, but the real issue is why give social media that much power in the first place? I believe this comes from a little too much self glorification and the expectation for others to agree, which can be disappointing.

Some, however, argue that Facebook and social sites can have an inspirational and encouraging impact on a person’s view of self. Jeffrey Hancock, a professor of communications at Cornell University and author of a study on Facebook’s psychological effects, argues that Facebook boost a person’s self-esteem. He states ” Unlike a mirror, which reminds us of who we are and may have a negative effect on self esteem if that image doesn’t match with our idea, Facebook can show a positive version of ourselves.” He goes on to say “We’re not saying that it’s a deceptive version of self, but it’s a positive one.

By no means does this type of effect of social media apply to everyone,  Some people strictly use social media for business purposes and other things. It is a great way to promote an event, products for sale, or simply keep in touch with long distance family, but it does, however,  negatively effect many people who get too carried away with getting the “likes” and attention of others.