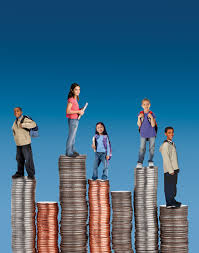 America gives the impression that education is important and every student deserves to have equal learning opportunities. However, several school districts in the United States are receiving far less funding than other districts. In other words, already wealthy schools are given more funding than underprivileged districts.

The majority of states in America decided that local property taxes would be the main source of funding for public education. Only 10 percent of public school funds come from the federal government, leaving the other 90 percent to be raised by local property tax. This can create a huge gap in public school funding between high income and low income communities because funds are distributed by district.

This causes a difference in the recourses a school can provide for its students. While wealthy schools can afford to provide after school activities, the newest technologies as well as, arts and music programs; poor schools can only afford to provide the essentials such as textbooks and teachers. Arne Duncan, U.S. Secretary of Education has said “23 states spend more per pupil in affluent schools than they do in high-poverty districts”. That’s nearly half the country.

Although, states like Colorado, Iowa and Utah manage property tax as public school funding really well showing, a less than half percent difference in funding between poor and wealthy districts. That gives each school a chance to provide students with equal learning opportunities.

However, other states don’t manage so well. The worst state being, Pennsylvania, with funding differences between wealthy and poor districts showing,  high income schools receive 33 percent more in finding than low income schools. Other states showing a significant gap is, Missouri, at a 17 percent difference and Vermont at an 18 percent difference. This in many cases leaves underprivileged schools short of resources and at a disadvantage. States like Colorado, Iowa and Utah should be an example to states like Pennsylvania, Vermont and Missouri.

Supporters, claim that using property tax is the most sufficient way to fund public education because, the only other form of funding states could use is, sales and income tax. Which could be a problem because; some states don’t collect income and sales tax. Although I do agree, property tax is a good form of funding for public education, is sound not be distributed based on district. Instead, property tax needs to be collected from all districts and distributed based on student and recourse needs.

The reason it is so important to have equal funding for school districts is because, lack of recourses can effect a student’s education. Wealthy district in many cases receive enough funding to provide for their students sufficiently, with enough left for afterschool activities, sports and up to date technology. While high-poverty districts hardly receive enough funds to provide for disabled students, non-english speaking students, extra curricular activities for students and better teachers. For several students this can have a significant effect on their education.

Education is divided when it comes to funding in many states because of unequal distribution of fund to schools. Furthermore, the lack of funds some schools receive creates a lack of recourses for students. It’s important that students receive equal learning opportunities to ensure students can be self sufficient later and if they decide to pursue higher education