It’s been two years since president Obama announced the plan for the implementation of a federal minimum wage increase. Apparently $10.10 an hour is not a high enough “minimum wage” in this day and age because fast food workers across America rose in excitement with the possibility of even more; but is $15 an hour a reasonable wage to pay someone who “flips burgers” for a living? With no disrespect to fast food workers (as I am a fast food worker myself), raising the minimum wage to $15 an hour would do more harm than good for our economy.

According to Connor Bolinder, a correspondent for the North Carolina State University, a reasonable “living” wage in several large cities in America is $14.88 per hour – almost double the rate of minimum wage. Connor also states that “everybody deserves to be treated as a human.” If anybody is suggesting that minimum wage is inhumane they need to remember that an employment application does not fill out itself and it’s no accident that people work in the field they do. I’ve been a fast food manager for 15 years. I’ve worked with all types of people, all different ages, educational background, etc., Listening to an employee complain about their job and how they do not make enough money has become almost a daily occurrence, but yet the people who complain the most are the ones who do the least to find a better higher-paying job.

If we raise the minimum wage, American citizens will have more money to spend and our economy will grow, correct? This is what economist Erin Weir for the Phoenix Star thinks. Erin states “benefits of a fair minimum wage are obvious. It means more much-needed income in the hands of low-paid workers.” If those who receive benefits from the state, such as food stamps or cash assistance, are being payed $15 an hour they would no longer be eligible for these benefits. Most minimum wage jobs like fast food workers do not receive benefits as part of their employment package. The cost of healthcare is is very high. It seems to me that the welfare benefits would be worth more than the insurance premiums president Obama is requiring Americans to pay. In fact, I have seen several crew members turn down a management position because it would put their income above the federal poverty level, which would make them ineligible for Medicaid, WIC, and food stamps. 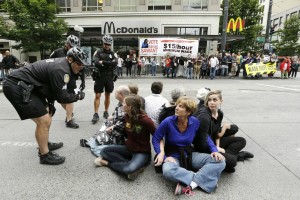 Fast food restaurants have one of the highest employee turnover rates in the employment industry. I have seen so many people come and go over the years that it is impossible for me to put all the names to the faces. A possible solution to the turnover rate is to increase the minimum wage. Sean Williams, an economic journalist and graduate from UC San Diego suggests a higher wage can inspire pride in a person’s job and improve morale, therefore making them more likely to stick with the company for the long run. I know first hand the struggles of controlling labor costs. When employees receive a 10 cent raise per hour every year, fast food restaurants are forced to raise the prices of their menu items by 10 cents just to control the cost of labor and food. Imagine every employee’s wage increased by nearly $7. Unless customers are willing to pay $9 for a junior bacon cheeseburger, our fast food restaurants will not be able to pay their employees, thus resulting in higher unemployment rates to begin with. If the upper class is crippled the lower class will fall also.

As stated earlier, I have worked in the fast food industry for 17 years, 15 of which were in a management position. I have worked with many types of people, of all ages and backgrounds. Some people, such as Matt Walsh, an author for the online newspaper The Blaze, simply do not think fast food workers should earn $15 an hour because they don’t earn it. Lets face it. The stereotype is the “burger flipper” is never going amount to anything.  I have met some great people in my career. According to economist Howard Wall at Lindenwood University, 45% of those working for minimum wage are living in households that have an annual income of more than $63,000 per year. If almost half of fast food workers are members of the middle-class, then raising the minimum wage to $15 an hour is not going to help the lower class. If anything, it’s going to make it difficult for low-class workers to keep their jobs when employers have to cut back on staffing levels due to the increase in labor cost.

[Protestors rally at a McDonald’s Restaurant]

America has always been known as the “land of the free.” It is where refugees seek shelter when their own country falls apart and becomes too poor or dangerous to live in. There will always be two Americas. There is the one that runs the show, eats the food, and spends the money; then there’s the one that performs the show, makes the food, and doesn’t have any money to spend because they don’t make enough. The truth is people make the money they make because they chose to. We are all given opportunities in life. It depends on who is willing to make something of those opportunities. The minimum wage should not be raised to $15 an hour for fast food workers. If this were to occur, the cost of living would rise dramatically, inflation would occur thus causing the U.S. dollar to be worth less, and thousands of employees would be let go from their jobs. President Obama announced there would be a “federal” minimum wage increase. This does not include fast food workers. The “fight for 15” seems to me to be a battle fast food workers will not win.