There are many different levels of pay inside a company associated with an employees job. It depends on employee’s job description, their daily tasks and responsibilities. But, in some companies CEO’S are paid a lot more than general workers in a company. Companies pay CEO’s more because they have more tasks and responsibilities in a company, and they are keeping the company in business. It’s unfair because without general workers, a company wouldn’t be able to do business every day because CEO’s are not at work every day and are not doing the simple tasks of keeping customers. General workers have contact with customers every day and CEO’s will more than likely not know customers or have built relationships with them.

What do CEO’S make a year compared to what general workers make? That’s a good question because over the past few years, their salary has gone up each year. Out of 350 public companies in the United States, a CEO could make $16,300,300 and a general worker could make up to $53,000.00. This is an issue because their is a large gap between general workers and CEO’s when they have some of the same duties. The average CEO’S compensation for 2014, was $16.3 million dollars at the largest firm. This proves how much more CEO’s make than a general worker.  In 1965, CEO’S salary started at $832.00 dollars, then in 2009 the salary went up to $120,662.000. A CEO’s pay in 1965 was lower but today that is some general workers bi-weekly take home amount. Compensation is up from 2009 by 54.3 percent, and from 2013, their salary is up by 3.9 percent. Most CEO’s will make more in one day, then a general worker will make in one year, and that is hard for general workers to take in. It’s hard on general workers to recognize how much more CEO’s make, and this is why CEO’s should not make as much as they do.

Now the question is why do CEO’s make as much as they do? Yes, they have a lot of responsibilities on their plate, but is it worth their salary? The number one reason CEO’s get paid as much as they do is because they make their own salary. The only ones who can change their salary are the Board of Directors. The chances of a Board changing a salary of a CEO is very slim because they know everything about a business. A company is not going to put themselves in a situation where they could lose their top employees over money. A CEO’s salary is based on an average of all CEO’s. The reason why they make so much is because the board of directors look at all CEO’s in a company, and come to an agreement about what their salary should be. For example if there is a large company, and more than one CEO, they can look at their progress throughout the year, and negotiate a price they are all satisfied with.

CEO’s pay scale is not the same compared to other countries because other countries may have different values and beliefs or more money for their country.  Some countries pay their higher employees more, and some countries try to equal it out between general workers. The United States is not a country that pays their CEO’s the most, but is also not a country that pays the least amount. In 2012, the ideal pay ratio for unskilled workers compared to CEO’s was 4.6 to 1. A reality CEO’s pay is $180,000.00 a year, and $30,000.00 reality for general workers a year. CEO’s pay scale differs country to country, for example in South Korea the ratio was, 41.7 to 1. This is the amount of CEO’s pay to one general workers pay. In South Korea, there would be 41.7 general workers pay added up, and it would equal one CEO’s pay. This states that South Korea believes in paying high amounts of wages to CEO’s. In Taiwan, the ratio was 20 to 1. Other countries could pay CEO’s more because employers believe there needed more, or have a greater responsibility than general workers.

Yes, general workers do mean a significant amount to a company because they make customer relationships, and bring in the business, but CEO’s do all the work behind the scene. CEO’s do get paid a lot, and deserve all of it because they run the business, and without them there would not be any employees to do business. Someone has to hire employees, make goals for a company and be in control. Companies can afford to pay their CEO’s more because without a CEO, there would not be any companies because CEO’s run businesses. 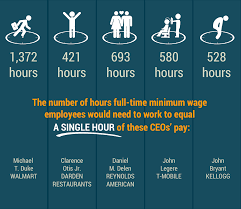