In an effort to attempt to make a once nice area less rundown in Columbus, Georgia, a Big for Beallwood process was started. Team Effort, a Christian missionary group, partner with the effort and brought many different groups of teens to work every week. One week in particular, a group came with a professional mural painter to decorate the playground bathroom and neighborhood association building. They finished the entire bathroom building the first day and were very proud of themselves for finishing the project with two days to spare. 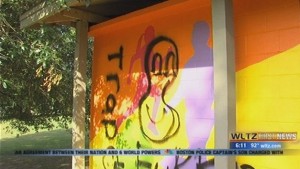 They came back the next morning to find the entire mural covered in black spray paint. As children stared in horror in the fresh graffiti, they couldn’t help but ask “Is that a peanut? Bowling pin? Really bad head?’ and then the best comment of all “They spelled the F word wrong! How could they spell it wrong?” Everyone there knew that the mural would eventually get graffitied, they just didn’t expect it to be overnight. The painter, luckily knew how to cover the black blemishes with yellow paint.

Further investigation throughout the day revealed that the building was defaced by a group of eleven or twelve year olds. The ladies in the neighborhood association, and others who dropped in during the day, were astonished that people did not want to better their own neighborhood.

The once nice neighborhood of Beallwood had become rundown with more rentals than home ownership. This is not just a problem in Columbus, Georgia. The US South is exponentially poorer than the rest of the United States. The Poverty line creates two separate Americas. Most “rich” people in the North of the United States have no idea exactly how bad it can be living poor in the South.

The American South is like a whole other world. People are friendlier, food is greasier, and the climate is hot and humid year round. Unfortunately the South is a bit more dilapidated than the North. Neighborhoods like Beallwood, once nice now dilapidated are common.. Many homes have gone from being owned to being rented. People move in and out of their houses without really caring about the uptake of their residency. This trend not only demonstrates the reason that neighborhoods are becoming run down, but it is also a sign of the economy. People cannot afford to buy homes so they rent.

Percent of children 5-17 living in Poverty

Many people in the US South still remember  a time before the Civil Rights movement, when segregation was the law of the land. Black bathrooms and drinking fountains and schools were by no means up to the same code as their whit equivalents. To a certain degree the South is still the same. Although no longer organized by race, there are still many neighborhoods that are just as poor as they were in the 1960s, desegregated to allow Hispanics and whites and blacks to all live in the same trailer parks.

One of my friends that came to help the Beallwood effort, commented repeatedly, almost incessantly, about how at least these people were “grateful” that we took time out of our lives to help them. That people in the trailer park we worked in last year were rude, and did not even have the decency to thank us. She did not consider that people have pride. The high poverty rate in the South does not mean that people choose to be poor or want to helped constantly. Sometimes they accept help because they need it, not because they want it. The trailer park we were volunteering in was one of the poorest in that part of South Carolina. The women who owned the trailer we worked on was having surgury and need a ramp built. So we did it for free. She was watching us because she couldn’t afford to pay someone to redo anything. Some people were badgering us to come work on their trailers too, but for the most part they just left us alone.

There are always going to be people trying to work the system and get the most amount of stuff for the least amount of their effort. Yet, we cannot just assume that every poor American is like that. Assuming that no one is trying desperately to become middle class citizens and failing to do so. The rest of America should not assume that every person living below the poverty line is fat, lazy, and content to live off the taxpayers money. Assuming generalizations about the majority of people is never going to bring about change. If many people are sitting under the poverty line they are not able to make a living wage.

America is a bit unrealistic when it comes to minimum wage. According to an article in the New York Times, minimum wage needs to be raised to around $11 to be around 50% of average wage as it was in the late 1960s at its peak. This would allow minimum wage workers to be able to support a small family on a minimum wage paying job and raise the poverty line. Raising minimum wage is a good way to lower the poverty line, but people worry that it won’t matter once inflation hits. Inflation would not matter if the Harkin-Miller proposal was used. According to the Economic Policy Institute, the proposal would raise minimum wage to counteract the inflation raises the wages would cause.

Many Americans are not well informed about how hard it is to grow up poor. To not be able to afford new clothes much less the latest Apple device that all their classmates have. Becoming aware there is a problem that divides our country into the have and the have nots, can help to fill the gaps and help everyone to be able to earn a livable wage. So that no American goes hungry while the rest of the country throws away that steak they bought three months ago and just discover in the back of their refrigerator. Although some people are too proud to let someone help better their neighborhood does not mean that the rest of the community does not want change.Helping people less fortunate than ourselves feels cliche, but it is necessary for our country to be able to pull its way out of debt.